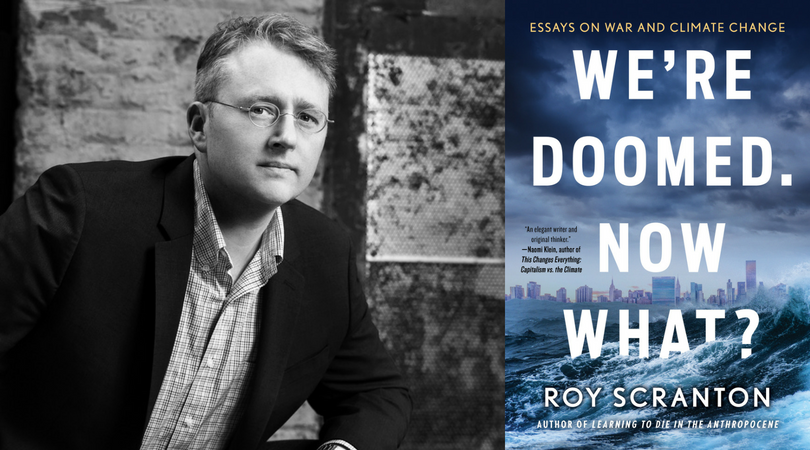 Essays on War and Climate Change

The time we’ve been thrown into is one of alarming and bewildering change – the breakup of the post-1945 global order, a multispecies mass extinction, and the beginning of the end of civilization as we know it. Not one of us is innocent, not one of us is safe. Now what?

"We're Doomed. Now What?" addresses the crisis of our time through a series of brilliant, moving, and original essays on climate change, war, literature, and loss, from one of the most provocative and iconoclastic minds of his generation. Whether writing about sailing through the melting Arctic, preparing for Houston’s next big storm, watching "Star Wars," or going back to the streets of Baghdad he once patrolled as a soldier, Roy Scranton handles his subjects with the same electric, philosophical, demotic touch that he brought to his ground-breaking New York Times essay, "Learning How to Die in the Anthropocene."

Roy Scranton is the author of "War Porn" and "Learning to Die in the Anthropocene: Reflections on the End of a Civilization." He has written for Rolling Stone, the New York Times, The Nation, Prairie Schooner, Boston Review, and elsewhere, and he co-edited "What Future: The Year’s Best Ideas to Reclaim, Reanimate & Reinvent Our Future" and "Fire and Forget: Short Stories from the Long War." He grew up in a working-class family in Oregon, dropped out of college after his freshman year, and spent his early twenties wandering the American West. In 2002, he enlisted in the US Army, serving four years, including a fourteen-month deployment to Iraq. After leaving the Army at the rank of sergeant, he completed his bachelor’s degree and earned a master’s degree at the New School for Social Research, then earned a PhD in English at Princeton. His essay “Learning How to Die in the Anthropocene” was selected for the "2014 Best American Science and Nature Writing," he was a post-doctoral research fellow at the Center for Energy and Environmental Research in the Human Sciences at Rice University, and he has been awarded a Whiting Fellowship in the Humanities and a Lannan Literary Fellowship for Fiction. He currently lives in South Bend, Indiana, with his partner and daughter, and teaches at the University of Notre Dame.

The Alcove in Rosslyn is located at 1800 N. Lynn St., at the corner of 19th Street and N. Moore Street. The entrance is on N. Moore Street next to Nando's Peri-Peri.